The "WE ARE ALL HOMELESS" Project - an introduction

This project began in 1993 when I started buying and collecting signs from the homeless. (More on that in the description of the art show HOME?) Over the past few years I have developed art work using the signs, which became focused while I was pursuing an MFA in Arts & Technology at UTDallas.

In the Fall 2009 semester we were challenged to develop an art project that would be interventionist in nature, meaning that it would cause some interruption in our daily lives, which resulted in the development of WE ARE ALL HOMELESS.

It began as a series of "flash mob happenings," where a few dozen people holding up authentic homeless signs converged on an intersection or other public location (2009-2010). Since then the project has resulted in a number of art installations and projects, some of which are described in this blog. In 2012 I presented a TEDx talk about the project. And in July of 2014 we began a 31-day, 24 city cross country trip buying signs from as many homeless people as possible, and making a documentary about the process.

The purpose of the project is to raise awareness about homelessness, and to change the preconceived ideas many people have about the homeless and their situations.

This blog has links to Dallas area homeless shelters and support networks, and below is more information about the project, related art projects, and homelessness in general. If you are interested in participating, leave a comment on this blog and your contact information.

Thanks and blessings for your interest in helping the homeless.

Cards we hand out to the public 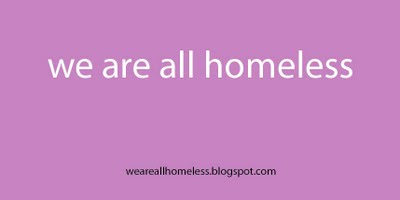 Posted by Willie Baronet at 4:52 PM No comments:

You can donate your money and your time to these institutions and others who are helping the homeless in the Dallas/Fort Worth area. Click on the links below. Thank you!

Show opening 11.11.09
Runs through 11.28.09
Hal Samples Gallery
2814 Main Street
Dallas, TX
A portion of the proceeds from this show will be donated to The Stewpot. 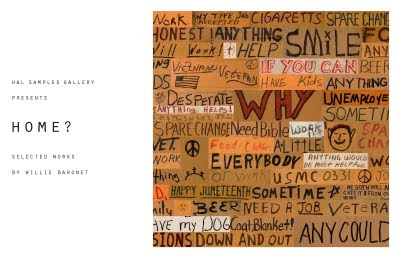 Posted by Willie Baronet at 4:50 PM No comments:

I am fascinated by the notion of “home.” Is it a physical place, a building, a structure, a house? Is it a state of being, a sense of safety, of being provided for, of identity? And what does it mean to be homeless: practically, spiritually, emotionally?

Since 1993 I’ve been buying and collecting homeless signs from people on the streets, in subways, under bridges, in cities near and far. It began from an awkwardness I felt when I’d pull up to an intersection and encounter a person holding a sign, asking for help. Like many people I wrestled with whether or not I was doing good by giving them money, wondered if they would spend the money on food or alcohol or drugs. Mostly I struggled with my moral obligations, and how my own choices contributed in conscious or unconscious ways to the poverty I was witnessing. I struggled with the unfairness of the lives people are born into, the physical, mental and psychological handicaps. And in my struggle I often avoided eye contact with those on the street, unwilling to really “see” them, and in doing so avoided seeing parts of myself.

All of that changed once I began asking them if they were willing to sell their signs. Immediately the dynamic changed between us, as we both had something the other wanted. I became very comfortable with the negotiations, and ultimately very comfortable in conversation with the homeless. I began to see them and hear them, and realized how vastly different they (and their stories) were. Some of my encounters were quite touching, and years later I can still remember many of them: the woman who cried telling me that the sign I’d bought had been made by her late husband, the many who asked me why I wanted the signs and were fascinated and inquisitive about using them in artwork, the very intoxicated man who wanted to autograph the sign before turning it over. My relationship to the homeless has been powerfully altered.

As a graphic designer for much of my professional career, I also marveled at the typography of the signs themselves, and the messages that were written. Wondering about the choices made by each person in the way they wrote, the size and legibility of the letters, the words they decided mattered enough to be on the signs. And occasionally the drawings, the humor, the typos.

I see the signs now as signposts of my own journey, inward and outward, of reconciling my life and my judgments with the plight of the homeless, and even with the notions of home, goodness, and compassion. Part of the passion that drives me to share this work with others is so that they too might examine their own.
Willie Baronet 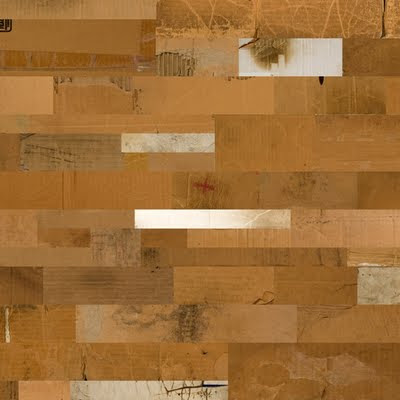 DONATE to the WE ARE ALL HOMELESS Impact Campaign

Our mission is to create a more compassionate world by creating awareness and provoking conversations about people on the streets, and inspiring others to find and implement solutions to the many causes of homelessness.
YOUR TAX DEDUCTIBLE DONATION CAN BE MADE HERE.
Your donation will make possible curriculum development for all grade levels, exhibits, books, web and tv content, documentary distribution, speaking opportunities and much more. Blessings and thank you! About WE ARE ALL HOMELESS

I've been buying and collecting signs from people on the streets since 1993. It began as a way to deal with my discomfort and fear of connecting with them, of seeing them. I use the signs in art installations hoping to raise awareness, compassion and start conversations about the many causes of homelessness. This journey has helped me see that there is no us and them. It's just us.
-Willie Baronet

Talks about WE ARE ALL HOMELESS

You can help by donating or volunteering: 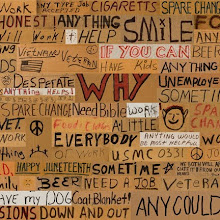